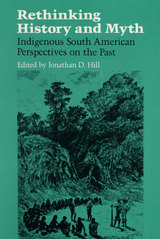 RETHINKING HISTORY: Indigenous South American Perspectives on the Past
edited by Jonathan D. Hill
University of Illinois Press, 2000
Paper: 978-0-252-06028-1
Rethinking History and Myth explores narrative and ritual expressions of mythic and historical modes of consciousness among indigenous peoples of the Andean, Amazonian, and intermediate lowland regions of South America. Focusing on indigenous perspectives of South American interaction with Western colonial and national societies, the authors trace the interrelationships between myth and history to demonstrate how these peoples have developed a dynamic interpretive framework that enables them to understand their past.

Examining specific cultural and linguistic traditions that shape the social consciousness of native South Americans, the authors show that historical and mythic consciousness work together in forming new symbolic strategies that allow indigenous peoples to understand their societies as at least partially autonomous groups within national and global power structures. This complex process is used to interpret the history of interethnic relations, allowing both individuals and groups to change themselves and alter their own circumstances.
AUTHOR BIOGRAPHY
Jonathan D. Hill is a professor of anthropology at Southern Illinois University at Carbondale and the author of several works, including Made-from-Bone: Trickster Myths, Music, and History from the Amazon.