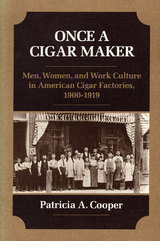 Patricia A. Cooper charts the course of competition, conflict, and camaraderie among American cigar makers during the two decades that preceded mechanization of their work. In the process, she reconstructs the work culture, traditions, and daily lives of the male cigar makers who were members of the Cigar Makers' International Union of America (CMIU) and of the nonunion women who made cigars under a division of labor called the "team system." But Cooper not only examines the work lives of these men and women, she also analyzes their relationship to each other and to their employers during these critical years of the industry's transition from handcraft to mass production.
AUTHOR BIOGRAPHY
Patricia A. Cooper is an associate professor of gender and women's studies at the University of Kentucky.