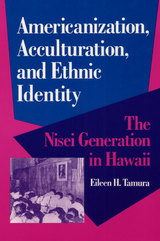 Wartime hysteria over "foreign" ways fueled a movement for Americanization that swept the United States during and after World War I. Eileen H. Tamura examines the forms that hysteria took in Hawai'i, where the Nisei (children of Japanese immigrants) were targets of widespread discrimination.

Tamura analyzes Hawaii's organized effort to force the Nisei to adopt "American" ways, discussing it within the larger phenomenon of Nisei acculturation. While racism was prevalent in "paradise," the Nisei and their parents also performed as active agents in their own lives, with the older generation attempting to maintain Japanese cultural ways and the younger wishing to become "true Americans." Caucasian "Americanizers," often associated with powerful agricultural interests, wanted labor to remain cheap and manageable; they lobbied for racist laws and territorial policies, portending the treatment of ethnic Japanese on the U.S. mainland during World War II.

Tamura offers a wealth of original source material, using personal accounts as well as statistical data to create an essential resource for students of American ethnic history and U.S. race and class relations.

AUTHOR BIOGRAPHY
Eileen H. Tamura is a professor of the history of education at the University of Hawai‘i–Manoa.