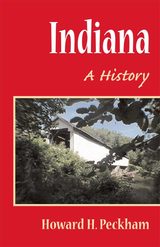 Indiana: A HISTORY
by Howard H. Peckham
University of Illinois Press, 1978
Paper: 978-0-252-07146-1
For much of Indiana's history, its distinctiveness has lain in its typicality. It has embodied–-and continues to embody-–values and behavior that are specifically American. In the late eighteenth century Indiana was the heart of the Old Northwest, a vast area conceived as a preserve where independent farmers and their families could live free from the shadow of slavery.

During the Civil War, the state found itself divided, with Indianans' allegiances split between Southern partisans and zealous Yankees. Throughout this period, the workshops and farms of Indiana continued to provide the growing nation with food and other necessities. Countless small towns prospered; Indianapolis grew, and Gary, on the southern shore of Lake Michigan, became synonymous with steel production, symbolizing the industrial might of America. Readers all over the country embraced the writings of Indianans such as James Whitcomb Riley and Booth Tarkington, while Indiana's painters disseminated iconic and idyllic images of America.

This comprehensive history traces the history of the Hoosier state, revealing its most significant contributions to the nation as a whole, while also exploring the unique character of its land and people. Howard H. Peckham relates recent changes in Indiana as a variety of ethnic and racial groups have come seeking a share in the good life, enriching and redefining this ever-changing state for the new millennium.
AUTHOR BIOGRAPHY
Howard H. Peckham was a historian, author, and for nine years director of the Indiana Historical Bureau and secretary of the Indiana Historical Society. He is a coauthor of A Brief History of Indiana. His books include The War for Independence and The Colonial Wars, 1689-1762.
TABLE OF CONTENTS