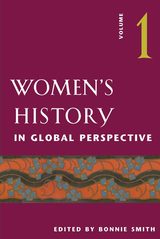 The American Historical Association's Committee on Women Historians commissioned some of the pioneering figures in women's history to prepare essays in their respective areas of expertise. This volume, the first in a series of three, collects their efforts.

Women's History in Global Perspective, Volume 1 addresses the comparative themes that the editors and contributors see as central to understanding women's history around the world. Later volumes will be concerned with issues that have shaped the history of women in particular regions. The authors of these essays, including Margaret Strobel, Alice Kessler-Harris, and Mrinalini Sinha, provide general overviews of the theory and practice of women's and gender history and analyze family history, nationalism, and work. The collection is rounded out by essays on religion, race, ethnicity, and the different varieties of feminism.

Incorporating essays from top scholars ranging over an abundance of regions, dates, and methodologies, the three volumes of Women's History in Global Perspective constitute an invaluable resource for anyone interested in a comprehensive overview on the latest in feminist scholarship.
AUTHOR BIOGRAPHY
Bonnie G. Smith is the Board of Governors Professor of History and director of the Institute for Research on Women at Rutgers University. She is the author of Confessions of a Concierge: Madame Lucie's History of Twentieth-Century France and many other books.
TABLE OF CONTENTS