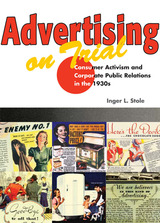 In the 1930s, the United States almost regulated advertising to a degree that seems unthinkable today. Activists viewed modern advertising as propaganda that undermined the ability of consumers to live in a healthy civic environment. Organized consumer movements fought the emerging ad business and its practices with fierce political opposition.

Inger L. Stole examines how consumer activists sought to limit corporate influence by rallying popular support to moderate and change advertising. Stole weaves the story through the extensive use of primary sources, including archival research done with consumer and trade group records, as well as trade journals and engagement with the existing literature. Her account of the struggle also demonstrates how public relations developed in order to justify laissez-faire corporate advertising in light of a growing consumer rights movement, and how the failure to rein in advertising was significant not just for civic life in the 1930s but for our era as well.

AUTHOR BIOGRAPHY
Inger L. Stole is a professor in the Department of Communication at the University of Illinois at Urbana-Champaign. She is the author of Advertising at War: Business, Consumers, and Government in the 1940s and coeditor of A Moment of Danger: Critical Studies in the History of U.S. Communication since World War II.
REVIEWS
"By examining the records of leading consumer movement groups and advertising associations, as well as key business journals like Printers' Ink and Advertising Age,  [Stole] skillfully depicts an intense battle over the responsibilities of advertising in American society, waged both in the halls of Congress and the court of public opinion. . . . An important contribution to the study of American consumerism."--American Historical Review


"That history [of commercial advertising] is told in Inger L. Stole's carefully researched and well-written story of the struggles among consumer advocates, advertisers, and government agencies over what federal legal constraints should apply to deceptive ads, especially for life-threatening products. . . . Both historians of consumer culture and activists who would undertake a new consumer movement will find Stole's book useful."--Journal of American History


"Well grounded in primary and secondary sources, this work makes an original contribution in arguing that the central role of advertising in the US economy justifies public policy debate of the need for accurate, honest advertising now as in the 1930s, and for the radicalism of consumer movement attempting to rein in advertising. Highly recommended."--Choice