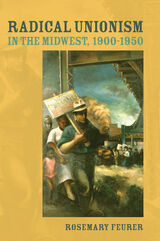 District 8 of the United Electrical, Radio, and Machine Workers (UE) developed a style of unionism designed to confront corporate power but also act as a force for social transformation in their community and nation.

Rosemary Feurer examines the fierce battles between these Midwestern electrical workers and the bitterly anti-union electrical and metal industry, Exploring the role of radicals in local movement formation, Feurer reveals a "civic" unionism that could connect community and union concerns to build solidarity and contest the political economy. District 8's spirited unionism included plant occupations in St. Louis and Iowa; campaigns to democratize economic planning; and strategies for national bargaining that elected officials inevitably branded as part of a communist conspiracy. Though destroyed by reactionaries and an anticommunist backlash, District 8 molded a story that tells another side of the labor movement's formation in the 1930s and 1940s, and can inform current struggles against corporate power in the modern global economy.

AUTHOR BIOGRAPHY
Rosemary Feurer is an associate professor of history at Northern Illinois University and coeditor of Against Labor: How U.S. Employers Organized to Defeat Union Activism.
REVIEWS
"Her book is a work of careful synthesis, and the depth of her research makes it a vitally important contribution to labor history and the history of American Communism. . . . This important study successfully illustrates the power and potential of an honestly left-wing unionism in American communities in the 1930s and 1940s."--Journal of American History


"An excellent book. . . . The author's exhaustive research into more than one hundred manuscript collections and her innovative look at Left-led unions will definitely earn her high marks among academics. Yet, even will all of her scholarly accomplishments, it is the book's explicitly political overtones that will resonate with its activist readers. . . . A must read for anyone hoping to draw lessons for the future form the examples of the past."--Labor Studies Journal


"Feurer's book is excellent in examining the character and appeal of William Sentner and UE District 8. Her analysis is grounded in a very thorough treatment of relevant primary sources as well as the political economy and culture of St. Louis."--Journal of Illinois History