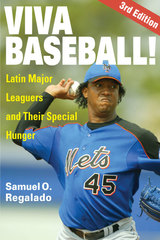 Lively and filled with vivid anecdotes, Viva Baseball! chronicles the struggles of Latin American professional baseball players in the United States from the late 1800s to the present.

As Latino players, managers, and owners continue to blossom into baseball's biggest stars, they have benefited from a growing Spanish-language media, a group identity, an increase in financial leverage and attention, and a burgeoning Latino culture in the United States. Although there have been several positive developments in the treatment of Latin American players, many, such as Albert Pujols, Pedro Martinez, Alex Rodriguez, and Ozzie Guillen, still face shocking racism. Samuel O. Regalado draws upon archives and rich interviews with Latin baseball stars like Felipe Alou, Orlando Cepeda, and Minnie Minoso to show the changing tenor of discrimination in the twenty-first-century game.

AUTHOR BIOGRAPHY
Samuel O. Regalado is a professor of history at California State University, Stanislaus. He is the author of Baseball in Nikkei America: From Immigration and Internment to the Majors and coeditor of Sport and Law: Historical and Cultural Intersections.
REVIEWS
"There have been other books written about baseball in Latin America and about Latin ballplayers. . . . But none of them has been so tightly argued, so well-grounded in scholarship beyond baseball history, and so passionate as Viva Baseball! . . . Regalado's essays show his mastery of the existing literature and his tenacious pursuit of wide-ranging personal interviews. . . . [This] is a passionate book, a proud book, and a book with great dignity."--Steve Gietschier, Sporting News