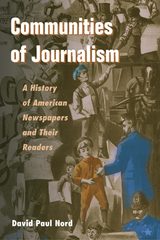 Widely acknowledged as one of our most insightful commentators on the history of journalism in the United States, David Paul Nord reveals how newspapers have intersected with religion, politics, reform, and urban life over nearly three centuries, His lively and wide-ranging discussion shows journalism to be a vital component of community. Ranging from the religion-infused towns of colonial America to the rapidly expanding urban metropolises of the late nineteenth century, Nord explores the cultural work of the press and how ordinary readers use journalism to form community attachments and engage in civic life.
AUTHOR BIOGRAPHY
David Paul Nord is a professor emeritus of journalism and an adjunct professor emeritus of history at Indiana University. He is the author of Faith in Reading: Religious Publishing and the Birth of Mass Media in America.
REVIEWS
“In twelve beautifully written essays, David Paul Nord examines journalism as a vital component of communities. . . . Communities of Journalism is among the best thought-provoking books to be published in our field. It is a ‘must’ for anyone who researches and teaches mass media history.”--Journalism History