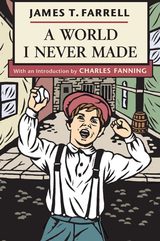 The first book in Farrell's five-volume series to be republished by the University of Illinois Press, A World I Never Made introduces three generations from two families, the working-class O'Neills and the lower-middle-class O'Flahertys. The lives of the O'Neills in particular reflect the tragic consequences of poverty, as young Danny O'Neill's parents--unable to sustain their large family--send him to live with his grandmother. Seen here at the age of seven, Danny is fraught with feelings of anxiety and dislocation as he learns the ins and outs of life on the street, confronting for the first time a world he never made.