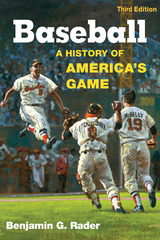 In this third edition of his lively history of America's game--widely recognized as the best of its kind--Benjamin G. Rader expands his scope to include commentary on Major League Baseball through the 2006 season: record crowds and record income, construction of new ballparks, a change in the strike zone, a surge in recruiting Japanese players, and an emerging cadre of explosive long-ball hitters.
AUTHOR BIOGRAPHY
Benjamin G. Rader is James L. Sellers Professor of History at the University of Nebraska, Lincoln, and the author of American Sports: From the Age of Folk Games to the Age of Televised Sports.
TABLE OF CONTENTS