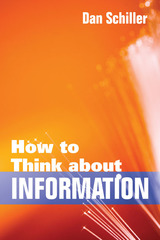 It’s common wisdom that the U.S. economy has continued to thrive despite the loss of industry because of the booming information sector, with high-paying jobs for everything from wireless networks to video games. We are told we live in the Information Age, in which communications networks, and media and information services drive the larger economy. While the Information Age may have looked sunny in the beginning, as it has developed it looks increasingly ominous: its economy and benefits grow more and more centralized-and in the United States, it has become less and less subject to democratic oversight.

Companies around the world have identified the value of information, and are now seeking to control its production, transmission, and consumption. In How to Think about Information, Dan Schiller explores the ways information has been increasingly commodified as a result, and how it both resembles and differs from other commodities. Through a linked series of theoretical, historical, and contemporary studies, Schiller reveals this commodification as both dynamic and expansionary, but also deeply conflicted and uncertain. He examines the transformative political and economic changes occurring throughout the informational realm, and analyzes key dimensions of the process, including the build-up of new technological platforms, the growth of a transnationalizing culture industry, and the role played by China as it reinserts itself into an informationalized capitalism.

Dan Schiller is a professor in the Graduate School of Library and Information Science at the University of Illinois, Urbana-Champaign. He is the author of Digital Capitalism: Networking the Global Market System and other books.