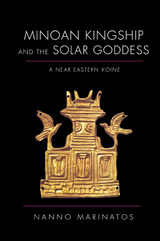 Ancient Minoan culture has been typically viewed as an ancestor of classical Greek civilization, but this book shows that Minoan Crete was on the periphery of a powerfully dynamic cultural interchange with its neighbors. Rather than viewing Crete as the autochthonous ancestor of Greece's glory, Nanno Marinatos considers ancient Crete in the context of its powerful competitors to the east and south.

Analyzing the symbols of the Minoan theocratic system and their similarities to those of Syria, Anatolia, and Egypt, Marinatos unlocks many Minoan visual riddles and establishes what she calls a "cultural koine," or standard set of cultural assumptions, that circulated throughout the Near East and the eastern Mediterranean at the time Minoan civilization reached its peak. With more than one hundred and fifty illustrations, Minoan Kingship and the Solar Goddess delivers a comprehensive reading of Minoan art as a system of thought.

AUTHOR BIOGRAPHY
Nanno Marinatos is a professor of classics at the University of Illinois, Chicago.
TABLE OF CONTENTS