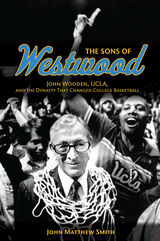 For more than a decade, the UCLA dynasty defined college basketball. In twelve seasons from 1964 to 1975, John Wooden's teams won ten national titles, including seven consecutive championships. The Bruins made history by breaking numerous records, but they also rose to prominence during a turbulent age of political unrest and youthful liberation. When Lew Alcindor and Bill Walton--the most famous college basketball players of their generation--spoke out against racism, poverty, and the Vietnam War, they carved out a new role for athletes, casting their actions on and off the court in a political light.

The Sons of Westwood tells the story of the most significant college basketball program at a pivotal period in American cultural history. It weaves together a story of sports and politics in an era of social and cultural upheaval, a time when college students and college athletes joined the civil rights movement, demonstrated against the Vietnam War, and rejected the dominant Cold War culture. This is the story of America's culture wars played out on the basketball court by some of college basketball's most famous players and its most memorable coach.

John Matthew Smith is an assistant professor of history at Georgia Tech.