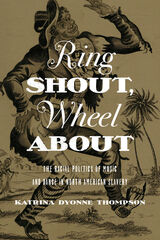 In this ambitious project, historian Katrina Thompson examines the conceptualization and staging of race through the performance, sometimes coerced, of black dance from the slave ship to the minstrel stage. Drawing on a rich variety of sources, Thompson explicates how black musical performance was used by white Europeans and Americans to justify enslavement, perpetuate the existing racial hierarchy, and mask the brutality of the domestic slave trade. Whether on slave ships, at the auction block, or on plantations, whites often used coerced performances to oppress and demean the enslaved.

As Thompson shows, however, blacks' "backstage" use of musical performance often served quite a different purpose. Through creolization and other means, enslaved people preserved some native musical and dance traditions and invented or adopted new traditions that built community and even aided rebellion.

Thompson shows how these traditions evolved into nineteenth-century minstrelsy and, ultimately, raises the question of whether today's mass media performances and depictions of African Americans are so very far removed from their troublesome roots.

TABLE OF CONTENTS
Cover
Title
Contents
Acknowledgements
Introduction
1. The Script: "Africa was but a blank canvas for Europe's imagination"
2. Casting: "They sang their home-songs, and danced, each with his free foot slapping the deck"
3. Onstage: "Dance you damned niggers, dance"
4. Backstage: "White folks do as they please, and the darkies do as they can"
5. Advertisement: "Dancing through the Streets and act lively"
6. Same Script, Different Actors: "Eb'ry time I wheel about, I jump Jim Crow"
Epilogue: The Show Must Go On
Notes
Index