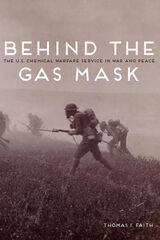 In Behind the Gas Mask, Thomas Faith offers an institutional history of the Chemical Warfare Service, the department tasked with improving the Army's ability to use and defend against chemical weapons during and after World War One. Taking the CWS's story from the trenches to peacetime, he explores how the CWS's work on chemical warfare continued through the 1920s despite deep opposition to the weapons in both military and civilian circles.

As Faith shows, the believers in chemical weapons staffing the CWS allied with supporters in the military, government, and private industry to lobby to add chemical warfare to the country's permanent arsenal. Their argument: poison gas represented an advanced and even humane tool in modern war, while its applications for pest control and crowd control made a chemical capacity relevant in peacetime. But conflict with those aligned against chemical warfare forced the CWS to fight for its institutional life--and ultimately led to the U.S. military's rejection of battlefield chemical weapons.
AUTHOR BIOGRAPHY
Thomas I. Faith is a historian at the U.S. Department of State.
TABLE OF CONTENTS
Cover
Title
Contents
Acknowledgments
Introduction
1. Origins, 1917
2. Battle, 1918
3. Crisis, 1919–1920
4. Improvement, 1921–1925
5. Legacy, 1926–1929
Notes
Bibliography
Index