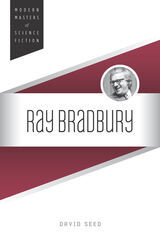 As much as any individual, Ray Bradbury brought science fiction's ideas into the mainstream. Yet he transcended the genre in both form and popularity, using its trappings to explore timely social concerns and the kaleidoscope of human experience while in the process becoming one of America's most beloved authors.

David Seed follows Bradbury's long career from the early short story masterpieces through his work in a wide variety of broadcast and film genres to the influential cultural commentary he spread via essays, speeches, and interviews. Mining Bradbury's classics and hard-to-find archival, literary, and cultural materials, Seed analyzes how the author's views on technology, authoritarianism, and censorship affected his art; how his Midwest of dream and dread brought his work to life; and the ways film and television influenced his creative process and visually-oriented prose style. The result is a passionate statement on Bradbury's status as an essential literary writer deserving of a place in the cultural history of his time.
AUTHOR BIOGRAPHY
David Seed is a professor of American literature at Liverpool University. He is author of Brainwashing: The Fictions of Mind Control and Science Fiction: A Very Short Introduction.
TABLE OF CONTENTS
Cover
Title page
Contents
Chapter 1. Out of the Science Fiction Ghetto
Chapter 2. The Subject of Mars
Chapter 3. Fahrenheit 451 in Contexts
Chapter 4. Bradbury on Space
Ray Bradbury Bibliography
Notes
Index