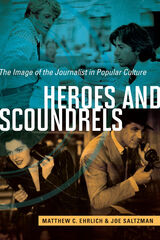 Whether it's the rule-defying lifer, the sharp-witted female newshound, or the irascible editor in chief, journalists in popular culture have shaped our views of the press and its role in a free society since mass culture arose over a century ago.

Drawing on portrayals of journalists in television, film, radio, novels, comics, plays, and other media, Matthew C. Ehrlich and Joe Saltzman survey how popular media has depicted the profession across time. Their creative use of media artifacts provides thought-provoking forays into such fundamental issues as how pop culture mythologizes and demythologizes key events in journalism history and how it confronts issues of race, gender, and sexual orientation on the job.

From Network to The Wire, from Lois Lane to Mikael Blomkvist, Heroes and Scoundrels reveals how portrayals of journalism's relationship to history, professionalism, power, image, and war influence our thinking and the very practice of democracy.
AUTHOR BIOGRAPHY
Matthew C. Ehrlich is a professor of journalism at the University of Illinois at Urbana-Champaign and the author of Journalism in the Movies. Joe Saltzman directs the Image of the Journalist in Popular Culture digital history project. He is a professor of journalism at the Annenberg School for Communication and Journalism at the University of Southern California and author of Frank Capra and the Image of the Journalist in American Film.
TABLE OF CONTENTS
Cover
Title
Contents
Acknowledgments
Author's Note
Introduction: Studying the Journalist's Image
1. History
2. Professionalism
3. Difference
4. Power
5. Image
6. War
Conclusion: Imagining the Future
Appendix
Notes
Index