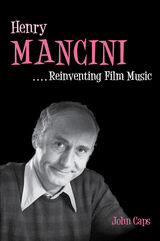 Through film composer Henry Mancini, mere background music in movies became part of pop culture--an expression of sophistication and wit with a modern sense of cool and a lasting lyricism that has not dated. The first comprehensive study of Mancini's music, Henry Mancini: Reinventing Film Music describes how the composer served as a bridge between the Big Band period of World War II and the impatient eclecticism of the Baby Boomer generation, between the grand formal orchestral film scores of the past and a modern American minimalist approach. Mancini's sound seemed to capture the bright, confident, welcoming voice of the middle class's new efficient life: interested in pop songs and jazz, in movie and television, in outreach politics but also conventional stay-at-home comforts. As John Caps shows, Mancini easily combined it all in his music.

Mancini wielded influence in Hollywood and around the world with his iconic scores: dynamic jazz for the noirish detective TV show Peter Gunn, the sly theme from The Pink Panther, and his wistful folk song "Moon River" from Breakfast at Tiffany's. Through insightful close readings of key films, Caps traces Mancini's collaborations with important directors and shows how he homed in on specific dramatic or comic aspects of the film to create musical effects through clever instrumentation, eloquent musical gestures, and meaningful resonances and continuities in his scores. Accessible and engaging, this fresh view of Mancini's oeuvre and influence will delight and inform fans of film and popular music.

John Caps is an award-winning writer and producer of documentaries. He served as producer, writer, and host for four seasons of the National Public Radio syndicated series The Cinema Soundtrack, featuring interviews with and music of film composers. He lives in Baltimore, Maryland.

A volume in the series Music in American Life

AUTHOR BIOGRAPHY
John Caps is an award-winning writer and producer of documentaries. He served as producer, writer, and host for four seasons of the National Public Radio syndicated series The Cinema Soundtrack, featuring interviews with and music of film composers. He lives in Baltimore, Maryland.
TABLE OF CONTENTS
Cover
Title Page
Copyright
Contents
Acknowledgments
Introduction: Here Was Something Fresh
1. Allegheny River Launch
2. Not Quite Jazz
3. The Music Factory
4. Big Screen, Little Screen
5. Blake Edwards and the High Times
6. Career Crescendos
7. First Cadence
8. The Break with Blake
9. Off to See the World
Illustrations follow page 148
10. Back to Television?
11. The Curse of the Pink Panther
12. Maturity, the Second Cadence
13. Frustration
14. Stolen Moments
15. A Closing Door That Wasn’t There Before
16. Almost to Broadway
17. Looking Back, Looking On
Appendix
Notes
Bibliography
Index
Back Cover