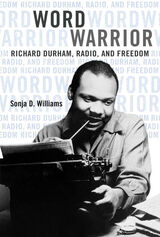 Posthumously inducted into the National Radio Hall of Fame in 2007, Richard Durham creatively chronicled and brought to life the significant events of his times. Durham's trademark narrative style engaged listeners with fascinating characters, compelling details, and sharp images of pivotal moments in American and African American history and culture.

In Word Warrior, award-winning radio producer Sonja D. Williams draws on archives and hard-to-access family records, as well as interviews with family and colleagues like Studs Terkel and Toni Morrison, to illuminate Durham's astounding career. Durham paved the way for black journalists as a dramatist and a star investigative reporter and editor for the pioneering black newspapers the Chicago Defender and Muhammed Speaks. Talented and versatile, he also created the acclaimed radio series Destination Freedom and Here Comes Tomorrow and wrote for popular radio fare like The Lone Ranger. Incredibly, his energies extended still further--to community and labor organizing, advising Chicago mayoral hopeful Harold Washington, and mentoring generations of activists.

Incisive and in-depth, Word Warrior tells the story of a tireless champion of African American freedom, equality, and justice during an epoch that forever changed a nation.

AUTHOR BIOGRAPHY
Sonja D. Williams is a professor in the Department of Media, Journalism, and Film at Howard University and the winner of three George Foster Peabody Awards as a radio producer. Her credits include the radio series Wade in the Water: African American Sacred Music Traditions and Black Radio: Telling It Like It Was.
REVIEWS
"Sonja Williams has written a book about Durham's life and work, cementing the brilliant journalist and activist's legacy."--Uprising Radio


"Thanks to this biography by Sonja D. Williams, a professor of communications at Howard University, Durham's contributions to our country's dramatic arts, journalism, trade unionism and African American political power will begin to earn the appreciation and admiration they deserve."--Against the Current


"This admirable and engaging study of Durham's life and work fills a huge gap in American history, and it comes at a time where we are in desperate need of reminders that do more than give us hope, but also provide us with the examples of the ways in which agency can be infused into our racially contentious social landscape."--Radio Journal