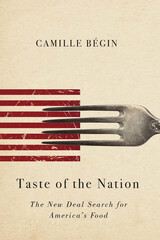 During the Depression, the Federal Writers' Project (FWP) dispatched scribes to sample the fare at group eating events like church dinners, political barbecues, and clambakes. Its America Eats project sought nothing less than to sample, and report upon, the tremendous range of foods eaten across the United States.

Camille Begin shapes a cultural and sensory history of New Deal-era eating from the FWP archives. From "ravioli, the diminutive derbies of pastries, the crowns stuffed with a well-seasoned paste" to barbeque seasoning that integrated "salt, black pepper, dried red chili powder, garlic, oregano, cumin seed, and cayenne pepper" while "tomatoes, green chili peppers, onions, and olive oil made up the sauce", Begin describes in mouth-watering detail how Americans tasted their food. They did so in ways that varied, and varied widely, depending on race, ethnicity, class, and region. Begin explores how likes and dislikes, cravings and disgust operated within local sensory economies that she culls from the FWP’s vivid descriptions, visual cues, culinary expectations, recipes and accounts of restaurant meals. She illustrates how nostalgia, prescriptive gender ideals, and racial stereotypes shaped how the FWP was able to frame regional food cultures as "American."
AUTHOR BIOGRAPHY
Camille Bégin is a Social Sciences and Humanities Research Council postdoctoral fellow at the Centre for Sensory Studies at Concordia University in Montreal.
REVIEWS
ASFS Book Award, Association for the Study of Food and Society, 2017
— Association for the Study of Food and Society