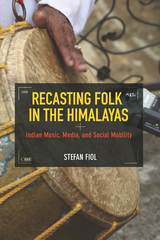 Colonialist, nationalist, and regionalist ideologies have profoundly influenced folk music and related musical practices among the Garhwali and Kumaoni of Uttarakhand. Stefan Fiol blends historical and ethnographic approaches to unlock these influences and explore a paradox: how the œfolk  designation can alternately identify a universal stage of humanity, or denote alterity and subordination. Fiol explores the lives and work of Gahrwali artists who produce folk music. These musicians create art as both a discursive idea and as a set of expressive practices across strikingly different historical and cultural settings. Juxtaposing performance contexts in Himalayan villages with Delhi recording studios, Fiol shows how the practices have emerged within and between sites of contrasting values and expectations. Throughout, Fiol presents the varying perspectives and complex lives of the upper-caste, upper-class, male performers spearheading the processes of folklorization. But he also charts their resonance with, and collision against, the perspectives of the women and hereditary musicians most affected by the processes. Expertly observed, Recasting Folk in the Himalayas offers an engaging immersion in a little-studied musical milieu.
AUTHOR BIOGRAPHY
Stefan Fiol is an associate professor of ethnomusicology at the University of Cincinnati.
TABLE OF CONTENTS
Cover
Title
Copyright
Contents
List of Illustrations
Acknowledgments
Introduction
1. The Emergence of the Folk Concept in Colonial Uttarakhand
2. Mohan Upreti and the Assimilation of Folk Music in Nehruvian India
3. Turning Dying Folk into Living Folk: The Musical Activism of Narendra Singh Negi
4. The Folk Sound without the Folk Body: Sohan Lal and the Rhizophonics of Dhol-Damaun
5. Professional Female Singers and the Gendering of Folk
6. The Goddess Plugged In: Pritam Bhartwan and the Commodification of Possession Rituals
Conclusion
Notes
Glossary
Bibliography
Index