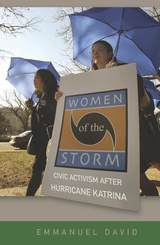 Hurricanes Katrina and Rita made landfall less than four weeks apart in 2005. Months later, much of New Orleans and the Gulf Coast remained in tatters. As the region faded from national headlines, its residents faced a dire future. Emmanuel David chronicles how one activist group confronted the crisis. Founded by a few elite white women in New Orleans, Women of the Storm quickly formed a broad coalition that sought to represent Louisiana's diverse population. From its early lobbying of Congress through its response to the 2010 BP oil spill, David shows how members' actions were shaped by gender, race, class, and geography. Drawing on in-depth interviews, ethnographic observation, and archival research, David tells a compelling story of collective action and personal transformation that expands our understanding of the aftermath of an historic American catastrophe.
AUTHOR BIOGRAPHY
Emmanuel David is an assistant professor of women and gender studies at the University of Colorado Boulder. He is coeditor of The Women of Katrina: How Gender, Race, and Class Matter in an American Disaster.
REVIEWS
“Women of the Storm pulls back the analytical curtain on one of the most unusual post-Katrina political movements. Drawing on firsthand observations and in-depth interviews, David reveals how privileged white New Orleans women used their philanthropic and volunteer skills to create a genuinely interracial alliance that could effectively pressure members of Congress to invest in the city’s and the whole coastal region’s revival. Here is a book for anyone doing intersectional digging into gendered social movements, congressional lobbying, or postdisaster politics.”—Cynthia Enloe, author of Seriously! Investigating Crashes and Crises as if Women Mattered


"It is a book about storm recovery but, more important, about the personalities that helped move that effort forward. David offers the reader sound sociological explanations about the collective actions of WOS, but in the end, he gives readers a tale of perseverance and love of community." --The Journal of Southern History


"Useful for anyone interested in studying gender, groups, disasters, politics, or social movements." --The Southern Register

TABLE OF CONTENTS
Cover
Title
Copyright
Contents
List of Illustrations
Prologue
Abbreviations
Introduction
1. Emergence: In which it occurs to a New Orleans philanthropist, in the wake of disaster, to form a group
2. Bridgework: On the calling upon of old friends and new acquaintances to join together
3. Making Plans, Going Public: On the crafting of a mission statement; descriptive of how the group’s roster is revealed, and then how the phones begin ringing
4. The Flight: Comprising a brief description of a journey to Washington and a few accounts of surviving the storm
5. The Press: Conference On political drama, performative utterances, and blue-­tarp umbrellas on Capital Hill
6. Hill Visits: Some accounts of invitations delivered to lawmakers; certain interactions prove succesful, others misfire
7. Noblesse Oblige: On thank-­you notes and civic stewardship
8. Divergent Paths: In which some women focus on other things
9. Invitations Accepted: Relating the decisive first visits to the scenes of destruction
10. New Orleans at Six Months: Amid Carnival, a city takes stock of the recovery, some plans unravel, and yet the women persist
11. The Breach: Involving a visit by two important persons, a chance encounter, and a revelation
12. Going National: In which several women’s organizations lend support for the resurrection of New Orleans
13. Storm Warnings: Containing a brief account of a media event
14. Women of the Storm: Return Involving another trip to Washington and some concrete achievements
15. The Presidential Debate: On the crafting of another grand proposal, resulting in a bid, a rejection, and a rejoinder
16. The BP Oil Spill and Beyond: How Women of the Storm become Women of the Spill; how a project is almost derailed; and how a third visit to Washington creates new alliances
Conclusion: On moral selves and moral communities
Acknowledgments
Notes on Method
Notes
Index