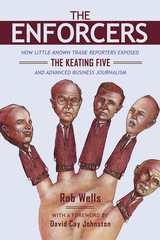 In the 1980s, real estate developer and banker Charles H. Keating executed one of the largest savings and loans frauds in United States history. Keating had long used the courts to muzzle critical reporting of his business dealings, but aggressive reporting by a small trade paper called the National Thrift News helped bring down Keating and offered an inspiring example of business journalism that speaks truth to power. Rob Wells tells the story through the work of Stan Strachan, a veteran financial journalist who uncovered Keating's misdeeds and links to a group of US senators—the Keating Five—who bullied regulators on his behalf. Editorial decisions at the National Thrift News angered advertisers and readers, but the newsroom sold ownership on the idea of investigative reporting as a commercial opportunity. Examining the National Thrift News's approach, Wells calls for a new era of business reporting that can—and must—embrace its potential as a watchdog safeguarding the interests of the public.
AUTHOR BIOGRAPHY
Rob Wells is an assistant professor in the School of Journalism and Strategic Media at the University of Arkansas and a former journalist with the Wall Street Journal, Bloomberg News, and the Associated Press.
TABLE OF CONTENTS
Cover
Title page
Copyright
CONTENTS
FOREWORD
ACKNOWLEDGMENTS
INTRODUCTION
1. THE REPORTER AND HIS INDUSTRY
2. THE ENFORCERS
3. THE DEVELOPER
4. ADVERTISING AND CONTROVERSY
5. KEATING’S WAR WITH THE PRESS
Photographs
6. MEDIA AND THE KEATING FIVE
7. “THE CHARLES KEATING OF FLORIDA”
8. THE FUTURE OF BUSINESS JOURNALISM
APPENDIX
NOTES
Index
Back Cover