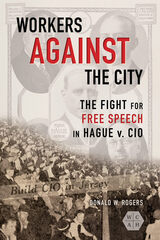 The 1939 Supreme Court decision Hague v. CIO was a constitutional milestone that strengthened the right of Americans, including labor organizers, to assemble and speak in public places. Donald W. Rogers eschews the prevailing view of the case as a morality play pitting Jersey City, New Jersey, political boss Frank Hague against the Committee for Industrial Organization (CIO) and allied civil libertarian groups. Instead, he draws on a wide range of archives and evidence to re-evaluate Hague v. CIO from the ground up. Rogers's review of the case from district court to the Supreme Court illuminates the trial proceedings and provides perspectives from both sides. As he shows, the economic, political, and legal restructuring of the 1930s refined constitutional rights as much as the court case did. The final decision also revealed that assembly and speech rights change according to how judges and lawmakers act within the circumstances of a given moment.

Clear-eyed and comprehensive, Workers against the City revises the view of a milestone case that continues to impact Americans' constitutional rights today.
AUTHOR BIOGRAPHY
Donald W. Rogers is a lecturer in the department of history at Central Connecticut State University. He is the author of Making Capitalism Safe: Work Safety and Health Regulation in America, 1880-1940 and editor of Voting and the Spirit of American Democracy: Essays on the History of Voting and Voting Rights in America.
REVIEWS
"A refreshing and thorough study of the Supreme Course case of Hague v. Committee for Industrial Organization, which considered the constitutionality of municipal restrictions on outdoor assembly. . . . Professor Rogers' analysis of Hague is incisive and original." --Journal of Supreme Court History


"Skillfully blending the histories of American civil liberties, organized labor, and urban politics, Rogers shows us how a complex set of forces has shaped and limited the rights of modern Americans to assemble and speak their minds in public."--James J. Connolly, author of An Elusive Unity: Urban Democracy and Machine Politics in Industrializing America


List of Illustrations
Acknowledgments
Introduction
Chapter 1. The Rise of Boss Hague: Municipal Politics and Civil Liberties in the Old Era
Chapter 2. The Transformation of Labor Unionism in a Boss-Run Town
Chapter 3. Street Fight and Media Fight in the Battle for Jersey City
Chapter 4. Into Federal District Court: Municipal Power and Civil Liberties in a New Forum
Chapter 5. “Time Out of Mind”: The Supreme Court Decision(s)
Epilogue: Aftermath and Legacy
Notes
Bibliography
Index