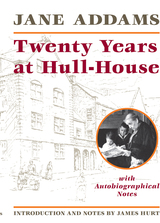 Published in 1910, this was Addams's most successful book; 80,000 copies were sold before her death in 1935. This annotated edition was issued on the occasion of the Hull-House centennial.

"<i>Twenty Years at Hull-House</i> is an indispensable classic of American intellectual and social history, and remains a rich source of provocative social theory. Jane Addams was both an activist of courage and 'a thinker of originality and daring.' Her life and writings exemplify the integration of social thought and action. Addams and her associates at Hull-House had wide-ranging influence not only on the key reform movements of their time but also on major currents of philosophical, sociological, and political thought. Filled with careful empirical observations, reflections on everyday life, accounts of practical action, and prescriptions for public policy, this small volume also embodies such important theoretical contributions as 'The Necessity of Social Settlement,' 'A Decade of Economic Discussion,' 'Tolstoyism,' and 'Problems of Poverty.' Long acclaimed for its autobiographical and historical value, <i>Twenty Years at Hull-House</i> should be read today as much for its enduring insights, critical analyses, and persuasive vision."--Bernice A. Carroll, editor of <i>Liberating Women's History: Theoretical and Critical Essays</i>
AUTHOR BIOGRAPHY
Jane Addams (1860-1935) was a social activist, Progressive reformer, and author of many books of social criticism. She was awarded the Nobel Peace Prize in 1931. James Hurt is professor of English at the University of Illinois at Urbana-Champaign.
REVIEWS
"One of the most important books ever written in the United States, Twenty Years at Hull-House remains a classic because it addresses large questions of human destiny and social justice in terms that are as relevant today as they were one hundred years ago."--Kathryn Kish Sklar, author of Catherin Beecher: A Study in American Domesticity


"After twenty years of relative obscurity, the early-twentieth-century social crusader and author of Twenty Years at Hull-House is once again in the spotlight."--Arianne Chernock, Lingua Franca


"The classic account of the development of Hull-House into a vibrant community center for Chicago's immigrants and poor. Addams' memoir is central to understanding the aims and mood of the progressive era."--The Front Table