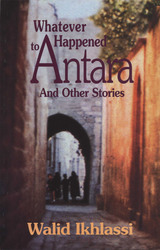 Whatever Happened to Antara?: And Other Stories
by Walid Ikhlassi
translated by Asmahan Sallah and Chris Ellery
introduction by Elizabeth Warnock Fernea

University of Texas Press, 2004
Paper: 978-0-292-70282-0
Walid Ikhlassi evokes the individual’s struggle for dignity and significance in the Syrian city of Aleppo during the French mandate of the forties and fifties. His characters’ seeking of personal fulfillment parallels the struggle of the nation for self-definition. The changing political and cultural landscape of Syria challenges individuals in their attempts to live lives of integrity, as Ikhlassi provides analytical insights into the civil society of Syria, the axis of his writing. From the boy Antara who personifies the Arab legend of a half-African slave warrior/hero to everyday middle-aged lovers, Ikhlassi’s characters fight colonial oppression and corruption from the newly formed government. Foreign and internal forces challenge the evolution of a modern nation rooted in traditional Arab values. Its strong and determined men and women refuse to accept victimhood. The introduction by author and critic Elizabeth Warnock Fernea places the stories in their historical and literary context. An avowed experimentalist, Ikhlassi portrays the modern human situation through techniques as widely divergent as realism, surrealism, interior monologue, and stream-of-consciousness. Selections of his work have been translated into English, Russian, French, German, Dutch, Armenian, and other languages.
AUTHOR BIOGRAPHY
Walid Ikhlassi is a Syrian short-story writer, novelist, and award-winning playwright. Asmahan Sallahtranslates both from Arabic into English and from English into Arabic. Chris Ellery, a former Fulbright scholar to Syria, teaches in the English Departmen
TABLE OF CONTENTS