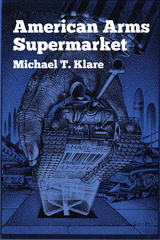 U.S. arms sales to Third World countries rapidly escalated from $250 million per year in the 1950s and 1960s to $10 billion and above in the 1970s and 1980s. But were these military sales, so critical in their impact on Third World nations and on America’s perception of its global role, achieving the ends and benefits attributed to them by U.S. policymakers? In American Arms Supermarket, Michael T. Klare responds to this troubling, still-timely question with a resounding no, showing how a steady growth in arms sales places global security and stability in jeopardy.

Tracing U.S. policies, practices, and experiences in military sales to the Third World from the 1950s to the 1980s, Klare explains how the formation of U.S. foreign policy did not keep pace with its escalating arms sales—how, instead, U.S. arms exports proved to be an unreliable instrument of policy, often producing results that diminished rather than enhanced fundamental American interests. Klare carefully considers the whole spectrum of contemporary American arms policy, focusing on the political economy of military sales, the evolution of U.S. arms export policy from John F. Kennedy to Ronald Reagan, and the institutional framework for arms export decision making. Actual case studies of U.S. arms sales to Latin America, Iran, and the Middle East provide useful data in assessing the effectiveness of arms transfer programs in meeting U.S. foreign policy objectives.

The author also rigorously examines trouble spots in arms policy: the transfer of arms-making technology to Third World arms producers, the relationship between arms transfers and human rights, and the enforcement of arms embargoes on South Africa, Chile, and other “pariah” regimes. Klare also compares the U.S. record on arms transfers to the experiences of other major arms suppliers: the Soviet Union and the “big four” European nations—France, Britain, the former West Germany, and Italy. Concluding with a reasoned, carefully drawn proposal for an alternative arms export policy, Klare vividly demonstrates the need for cautious, restrained, and sensitive policy.