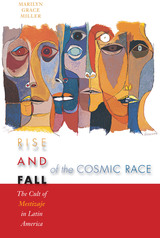 Latin America is characterized by a uniquely rich history of cultural and racial mixtures known collectively as mestizaje. These mixtures reflect the influences of indigenous peoples from Latin America, Europeans, and Africans, and spawn a fascinating and often volatile blend of cultural practices and products. Yet no scholarly study to date has provided an articulate context for fully appreciating and exploring the profound effects of distinct local invocations of syncretism and hybridity. Rise and Fall of the Cosmic Race fills this void by charting the history of Latin America’s experience of mestizaje through the prisms of literature, the visual and performing arts, social commentary, and music. In accessible, jargon-free prose, Marilyn Grace Miller brings to life the varied perspectives of a vast region in a tour that stretches from Mexico and the Caribbean to Brazil, Ecuador and Argentina. She explores the repercussions of mestizo identity in the United States and reveals the key moments in the story of Latin America’s cult of synthesis. Rise and Fall of the Cosmic Race examines the inextricable links between aesthetics and politics, and unravels the threads of colonialism woven throughout national narratives in which mestizos serve as primary protagonists. Illuminating the ways in which regional engagements with mestizaje represent contentious sites of nation building and racial politics, Miller uncovers a rich and multivalent self-portrait of Latin America’s diverse populations.
AUTHOR BIOGRAPHY
Marilyn Grace Miller is Assistant Professor of Spanish and Portuguese at Tulane University in New Orleans.
TABLE OF CONTENTS


PrefaceAcknowledgmentsIntroduction: The Cult of Mestizaje1. José Vasconcelos' About-Face on the Cosmic Race2. Caribbean Counterpoint and Mulatez3. Tango in Black and White4. Showcasing Mixed Race in Northeast Brazil5. Dis/encounters in the Labyrinths: Mestizaje in QuitoEpilogue: Globalization, Cyberhybridity, and Fifth World MestizajeNotesBibliographyIndex