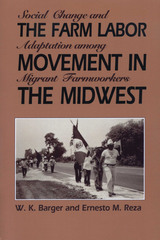 The Farm Labor Organizing Committee (FLOC) was founded by Baldemar Velásquez in 1967 to challenge the poverty and powerlessness that confronted migrant farmworkers in the Midwest. This study documents FLOC's development through its first quarter century and analyzes its effectiveness as a social reform movement.

Barger and Reza describe FLOC's founding as a sister organization of the United Farm Workers (UFW). They devote particular attention to FLOC's eight-year struggle (1978-1986) with the Campbell Soup company that led to three-way contracts for improved working conditions between FLOC, Campbell Soup, and Campbell's tomato and cucumber growers in Ohio and Michigan. This contract significantly changed the structure of agribusiness and instituted key reforms in American farm labor.

The authors also address the processes of social change involved in FLOC actions. Their findings are based on extensive research among farmworkers, growers, and representatives of agribusiness, as well as personal involvement with FLOC leaders and supporters.