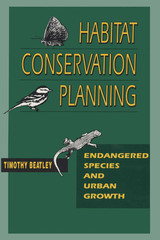 As environmental awareness grows around the world, people are learning that a diversity of species and the habitat to support them is necessary to maintain the ecological health of the earth. At the same time, however, the pressure to develop wildlife habitat for human settlement and economic gain also grows, causing frequent clashes between the forces of development and of conservation.

This pioneering study focuses on a new tool for resolving the land-use conflict—the creation of habitat conservation plans (HCPs). Timothy Beatley explores the development and early results of this provision of the United States' federal Endangered Species Act, which allows development of some habitat and a certain "take" of a protected species in return for the conservation of sufficient habitat to ensure its survival and long-term recovery.

Beatley looks specifically at nine HCPs in California, Nevada, Texas, and Florida, states where biological diversity and increasing populations have triggered many conflicts. Some of the HCPs include the San Bruno Mountain HCP near San Francisco, the North Key Largo HCP in the Florida Keys, the Clark County HCP near Las Vegas, Nevada, and the Balcones Canyonlands HCP near Austin, Texas. This first comprehensive overview of habitat conservation planning in the United States will be important reading for everyone involved in land-use debates.

AUTHOR BIOGRAPHY
Timothy Beatley is Teresa Heinz Professor of Sustainable Communities andChair of the Department of Urban and Environmental Planning at the University of Virginia.
REVIEWS
Overall, I strongly recommend it for geographers and planners interested in conservation in and near urban areas, and for anyone who needs further evidence of the very real difficulties involved in finding 'win-win' outcomes to conflicts in the United States between economic development and biodiversity protection.
— Professional Geographer