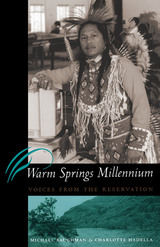 Established in 1855 on an area one-fifteenth the size of the lands relinquished in return for it, the Warm Springs Reservation in north central Oregon is home to some 3,600 Warm Springs, Wasco, and Paiute Indians, half of whom are under twenty. This book seeks to understand the reservation’s inhabitants as a "viable people" who are both visible and vocal as they reflect on their daily lives, their struggles and successes, and their hopes for the future. Michael Baughman and Charlotte Hadella present extended interviews with seven Indian and two non-Indian members of the community. They discuss issues such as the difficulty of maintaining traditional lifeways centered around hunting, fishing, and gathering; the disruptions caused by alcoholism and diseases such as diabetes; and the need for culturally appropriate education for the young. The authors frame the interviews with explanatory material that covers the reservation’s history and relations with white society and its efforts to transmit native languages and cultural traditions to its children.
AUTHOR BIOGRAPHY
Michael Baughman and Charlotte Hadella are affiliated with Southern Oregon University in Ashland, where Baughman is Emeritus Professor and Hadella is Associate Professor of English.
TABLE OF CONTENTS