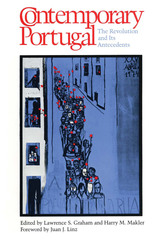 Despite worldwide interest in the Portuguese Revolution of 1974, Portugal remained for most people a little known and poorly understood country, neglected for years by social scientists. Editors Graham and Makler brought together for the first time in one substantive volume most of the leading social science experts on Portugal. The contributors' highly original research represents the best work generated by the International Conference Group on Modern Portugal at its two major conferences held in 1973 and 1976. The result is a comprehensive collection of essays discussing in detail the events leading up to the revolution, the causes of the military coup, and the movement of a society on the brink of revolutionary upheaval toward open, democratic parliamentary elections. As the first interdisciplinary study to span fifty years of Portuguese history from the Estado Novo of 1926 to the eventual social democratic republic, this book stands alone in its field. The specialist as well as the general reader will find insights into the dynamics of Portugal's people, politics, and economics.
AUTHOR BIOGRAPHY
Lawrence S. Graham is Professor Emeritus of Government at the University of Texas at Austin.Harry M. Makler has taught at the University of Toronto and at Stanford University.
TABLE OF CONTENTS


ForewordAcknowledgmentsIntroduction (Harry M. Makler and Lawrence S. Graham)1. The “Régime d’Exception” That Became the Rule: Forty-Eight Years of Authoritarian Domination in Portugal (Philippe C. Schmitter)2. The Evolution of Portuguese Corporatism under Salazar and Caetano (Manuel De Lucena)3. The Corporatist Tradition and the Corporative System in Portugal: Structured, Evolving, Transcended, Persistent (Howard J. Wiarda)4. The Portuguese Industrial Elite and Its Corporative Relations: A Study of Compartmentalization in an Authoritarian Regime (Harry M. Makler)5. Peasants and Politics in Salazar’s Portugal: The Corporate State and Village “Nonpolitics” (Joyce Firstenberg Riegelhaupt)6. The Military and the Portuguese Dictatorship, 1926–1974: “The Honor of the Army” (Douglas L. Wheeler)7. The Military in Politics: The Politicization of the Portuguese Armed Forces (Lawrence S. Graham)8. Electoral Behavior and Political Militancy (John L. Hammond)9. Emigration and Its Implications for the Revolution in Northern Portugal (Caroline B. Brettell)10. Analysis and Projection of Macroeconomic Conditions in Portugal (Rudiger Dornbusch, Richard S. Eckaus, and Lance Taylor)11. The Present Economic Situation: Its Origins and Prospects (Mário Murteira)Epilogue (Stanley G. Payne)Appendix