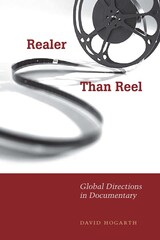 Television and globalization have transformed the traditional documentary almost beyond recognition, converting what was once a film genre devoted to public service and education into a popular televisual commodity with productions ranging from serious public affairs programming to TV “reality” shows and “docusoaps.” Realer Than Reel offers a state-of-the-art overview of international documentary programming that investigates the possibilities documentary offers for local and public representation in a global age, as well as what actually constitutes documentary in a time of increasing digitalization and manipulation of visual media. David Hogarth focuses on public affairs, nature, and reality shows from around the world, drawing upon industry data, producer interviews, analyses of selected documentary programs, and firsthand observations of market sites. He looks at how documentary has become a transnational product through exports, co-ventures, and festival contacts; how local and regional “place” is represented in global documentary, especially by producers such as Discovery Networks International and the National Geographic Channel; how documentary addresses the needs of its viewers as citizens through public service broadcasting; and how documentary is challenging accepted conventions of factuality, sense, and taste. The concluding chapter considers the future of both documentary as a genre and television as a global factual medium, asking whether TV will continue to “document” the world in any meaningful sense of the term.
AUTHOR BIOGRAPHY
DAVID HOGARTH is Associate Professor of Communication Studies at York University in Toronto, Ontario.
TABLE OF CONTENTS