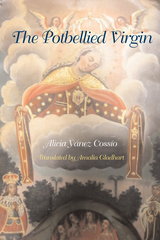 The Potbellied Virgin
by Alicia Yánez Cossío
translated by Amalia Gladhart
University of Texas Press, 2006
Paper: 978-0-292-71410-6
In an unnamed town in the Ecuadorian Andes, a small wooden icon—La Virgen Pipona (the Potbellied Virgin)—conceals the documents that define the town's social history. That history recently has been dominated by the women of the Benavides family, a conservative clan and, not coincidentally, the caretakers of the Virgin. Their rivals are the Pandos, a family led by four old men who spend their days smoking in the park across from the Virgin's cathedral and offering revisionist versions of local and national events. When a military skirmish threatens the Virgin (and the secret in her famous belly), the Benavides women must scramble to preserve their place as local matriarchs—without alerting the old Pandos to the opportunity that might enable them to finally supplant their rivals. One of Ecuador's foremost contemporary writers, Alicia Yánez Cossío illuminates the complexity of Andean society by placing disenfranchised players such as women and Amerindians onstage with traditional powers such as the military and the church. Folk wisdom, exemplified in The Potbellied Virgin by the beautifully translated proverbs so popular with the Benavideses and the Pandos alike, stands up to historical record. Such inclusiveness ultimately allows the whole truths of Yánez Cossío's subjects to emerge. Only the second of her novels to be translated into English, The Potbellied Virgin (La cofradía del mullo del vestido de la Virgen Pipona) is a funny, focused portrait of Ecuadorian life in the twentieth century.
AUTHOR BIOGRAPHY
ALICIA YÁNEZ COSSÍO is the author of nine novels as well as numerous other works, including poetry, short stories, children's books, and a memoir. She lives in Quito, Ecuador.AMALIA GLADHART is Associate Professor of Spanish at the University of Oregon.
TABLE OF CONTENTS