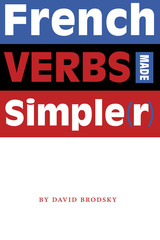 It’s time for a new approach to learning French verbs. Unlike popular verb guides that require the rote memorization of hundreds of verb forms, this book clearly explains the rules that govern the conjugation of all classes of French verbs—especially the irregular ones that give second-language learners the most trouble. These straightforward, easy-to-understand rules for conjugating French verbs are effective learning tools for both beginning students and more advanced speakers who want to perfect their usage of French verb forms. French Verbs Made Simple(r) has many helpful features that you won’t find in any other verb guide:Clear explanations of all verb tenses and forms.The simple patterns and rules that govern the conjugation of all verbs—including those verbs whose irregularities follow patterns that can be easily learned.A detailed discussion of how each verb form is used, with numerous examples.A full explanation of whether a verb should be conjugated with avoir or être, and the conditions under which the past participle is variable—two of the thorniest problems for students of French.An extended treatment of the subjunctive that will help you understand why it is used in some situations but not others.Complete conjugations for 57 basic model verbs (along with 27 “variants”) and a comprehensive listing of some 6,200 verbs that indicates which of the models each verb follows.Going well beyond any other guide in the clarity and detail of its explanations—as well as the innovative manner in which individual verbs are linked to model conjugations—French Verbs Made Simple(r) is the only guide to French verbs a learner needs.
AUTHOR BIOGRAPHY
DAVID BRODSKY, who currently resides in Aix-en-Provence, France, is also the author of Spanish Verbs Made Simple(r). He holds advanced degrees from MIT and Yale University. His extensive experience working abroad as an economist and project manager showed
TABLE OF CONTENTS