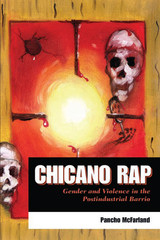 Powered by a driving beat, clever lyrics, and assertive attitudes, rap music and hip hop culture have engrossed American youth since the mid-1980s. Although the first rappers were African Americans, rap and hip hop culture quickly spread to other ethnic groups who have added their own cultural elements to the music. Chicano Rap offers the first in-depth look at how Chicano/a youth have adopted and adapted rap music and hip hop culture to express their views on gender and violence, as well as on how Chicano/a youth fit into a globalizing world. Pancho McFarland examines over five hundred songs and seventy rap artists from all the major Chicano rap regions—San Diego, San Francisco and Northern California, Texas, and Chicago and the Midwest. He discusses the cultural, political, historical, and economic contexts in which Chicano rap has emerged and how these have shaped the violence and misogyny often expressed in Chicano rap and hip hop. In particular, he argues that the misogyny and violence of Chicano rap are direct outcomes of the “patriarchal dominance paradigm” that governs human relations in the United States. McFarland also explains how globalization, economic restructuring, and the conservative shift in national politics have affected Chicano/a youth and Chicano rap. He concludes with a look at how Xicana feminists, some Chicano rappers, and other cultural workers are striving to reach Chicano/a youth with a democratic, peaceful, empowering, and liberating message.
AUTHOR BIOGRAPHY
PANCHO MCFARLAND is Assistant Professor of Sociology at Chicago State University.
TABLE OF CONTENTS