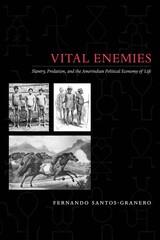 Analyzing slavery and other forms of servitude in six non-state indigenous societies of tropical America at the time of European contact, Vital Enemies offers a fascinating new approach to the study of slavery based on the notion of “political economy of life.” Fernando Santos-Granero draws on the earliest available historical sources to provide novel information on Amerindian regimes of servitude, sociologies of submission, and ideologies of capture. Estimating that captive slaves represented up to 20 percent of the total population and up to 40 percent when combined with other forms of servitude, Santos-Granero argues that native forms of servitude fulfill the modern understandings of slavery, though Amerindian contexts provide crucial distinctions with slavery as it developed in the American South. The Amerindian understanding of life forces as being finite, scarce, unequally distributed, and in constant circulation yields a concept of all living beings as competing for vital energy. The capture of human beings is an extreme manifestation of this understanding, but it marks an important element in the ways Amerindian “captive slavery” was misconstrued by European conquistadors. Illuminating a cultural facet that has been widely overlooked or miscast for centuries, Vital Enemies makes possible new dialogues regarding hierarchies in the field of native studies, as well as a provocative re-framing of pre- and post-contact America.
AUTHOR BIOGRAPHY
FERNANDO SANTOS-GRANERO is a staff researcher at the Smithsonian Tropical Research Institute in Panama and has worked with the Yanesha of the Peruvian Amazon for three decades.
TABLE OF CONTENTS