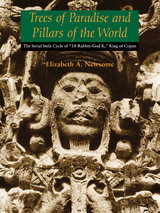 Assemblies of rectangular stone pillars, or stelae, fill the plazas and courts of ancient Maya cities throughout the lowlands of southern Mexico, Guatemala, Belize, and western Honduras. Mute testimony to state rituals that linked the king's power to rule with the rhythms and renewal of time, the stelae document the ritual acts of rulers who sacrificed, danced, and experienced visionary ecstasy in connection with celebrations marking the end of major calendrical cycles. The kings' portraits are carved in relief on the main surfaces of the stones, deifying them as incarnations of the mythical trees of life.

Based on a thorough analysis of the imagery and inscriptions of seven stelae erected in the Great Plaza at Copan, Honduras, by the Classic Period ruler "18-Rabbit-God K," this ambitious study argues that stelae were erected not only to support a ruler's temporal claims to power but more importantly to express the fundamental connection in Maya worldview between rulership and the cosmology inherent in their vision of cyclical time. After an overview of the archaeology and history of Copan and the reign and monuments of "18-Rabbit-God K," Elizabeth Newsome interprets the iconography and inscriptions on the stelae, illustrating the way they fulfilled a coordinated vision of the king's ceremonial role in Copan's period-ending rites. She also links their imagery to key Maya concepts about the origin of the universe, expressed in the cosmologies and mythic lore of ancient and living Maya peoples.

AUTHOR BIOGRAPHY
Elizabeth A. Newsome is Associate Professor of Precolumbian and Native American Art History at the University of California, San Diego.
TABLE OF CONTENTS