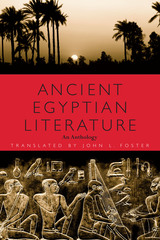 Poetry, stories, hymns, prayers, and wisdom texts found exquisite written expression in ancient Egypt while their literary counterparts were still being recited around hearth fires in ancient Greece and Israel. Yet, because of its very antiquity and the centuries during which the language was forgotten, ancient Egyptian literature is a newly discovered country for modern readers.

This anthology offers an extensive sampling of all the major genres of ancient Egyptian literature. It includes all the texts from John Foster's previous book Echoes of Egyptian Voices, along with selections from his Love Songs of the New Kingdom and Hymns, Prayers, and Songs: An Anthology of Ancient Egyptian Lyric Poetry, as well as previously unpublished translations of four longer and two short poems. Foster's translations capture the poetical beauty of the Egyptian language and the spirit that impelled each piece's composition, making these ancient masterworks sing for modern readers. An introduction to ancient Egyptian literature and its translation, as well as brief information about the authorship and date of each selection, completes the volume.

AUTHOR BIOGRAPHY
John L. Foster was a Research Associate at the Oriental Institute of the University of Chicago, where he studied, translated, and wrote about ancient Egyptian literature from 1966 until his death in 2011.
TABLE OF CONTENTS