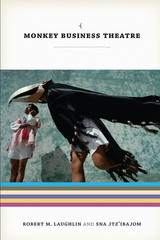 BUY FROM
Monkey Business Theatre
by Robert M. Laughlin
University of Texas Press, 2008
eISBN: 978-0-292-77801-6
Paper: 978-0-292-72609-3
In 1983, a group of citizens in San Cristóbal de las Casas, Chiapas, formed Sna Jtz’ibajom, the Tzotzil-Tzeltal Maya writers’ cooperative. In the two decades since, this group has evolved from writing and publishing bilingual booklets to writing and performing plays that have earned them national and international renown. Anthropologist Robert M. Laughlin has been a part of the group since its beginnings, and he offers a unique perspective on its development as a Mayan cultural force. The Monkey Business Theatre, or Teatro Lo’il Maxil, as this branch of Sna Jtz’ibajom calls itself, has presented plays in virtually every corner of the state of Chiapas, as well as in Mexico City, Guatemala, Honduras, Canada, and in many museums and universities in the United States. It has presented to the world, for the first time in drama, a view of the culture of the Mayas of Chiapas. In this work, Laughlin presents a translation of twelve of the plays created by Sna Jtz’ibajom, along with an introduction for each. Half of the plays are based on myths and half on the social, political, and economic problems that have confronted—and continue to confront—the Mayas of Chiapas.
AUTHOR BIOGRAPHY
ROBERT M. LAUGHLIN is Curator Emeritus of Meso-american ethnology in the Department of Anthropology at the National Museum of Natural History, Smithsonian Institution. He lives in Alexandria, Virginia.SNA JTZ'IBAJOM is a Mayan writers' cooperative based
TABLE OF CONTENTS


Foreword: The Visitors' Question by Carter WilsonPreface: Recollections of a Ghost by Ralph LeeAcknowledgmentsPronunciation and Translation1. Looking Back, Looking Forward: In the Beginning2. Febrero Loco: A Live Theatre in the Making3. The Theatre on the Road: The Great Adventure4. Personal and Social Impacts5. The Immokalee Special: Social Action in Florida6. The FutureThe PlaysThe Loafer and the BuzzardWho Believes in Spooks?Deadly InheritanceJaguar DynastyLet's Go to Paradise!From All for AllTorches for a New DawnThe Story of Our RootsWorkers in the Other WorldWhen Corn Was BornMexico with Us Forever!The World Turned on Its HeadAppendix 1: Individuals Referred to in the TextAppendix 2: Members and Former Members of Sna Jtz'ibajomAppendix 3: Length of ServiceGlossaryBibliographyIndex