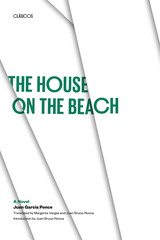 Like waves ebbing and flowing, love surges and subsides among four friends who share a vacation at the house on the beach. As they navigate the seas of love and friendship, jealousy and unfaithfulness, Elena, Marta, Eduardo, and Rafael are swept up in the opposing currents that flow between security and personal freedom, marriage and sexual liberation, family and work, provincial and city life, and traditional and unconventional gender roles.

This deceptively simple novel, published in Mexico in 1966 as La casa en la playa and here translated into English for the first time, is an important work by one of Mexico's, and indeed Latin America's, major writers of the twentieth century. Juan García Ponce helped Mexican arts and letters break out of the ossified styles and themes of the post-Revolutionary "Mexican School" with works that explore the conflict between individual desire and the demands of family and work. Written at a turning point in his career, The House on the Beach foreshadows his embrace of the erotic encounter as a means of undermining rigid, socially constructed personal identity. It supports feminist views and probes deeply into the contradictions, backwardness, and progress of modern Mexican society.

Juan García Ponce is one of the most respected contemporary essayists in Latin America. Translator Margarita Vargas is an assistant professor of Spanish at the State University of New York at Buffalo. Juan Bruce-Novoa (1944–2010) was Professor of Latin American and U.S. Chicano/Latino Literatures and Cultures, Film Studies, and Critical Theory at the University of California, Irvine.