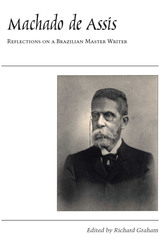 Joaquim Maria Machado de Assis (1839-1908) never left Brazil and rarely traveled outside his native city of Rio de Janeiro, yet he is widely acknowledged by those who have read him as one of the major authors of the nineteenth century. His works are full of subtle irony, relentless psychological insights, and brilliant literary innovations. Yet, because he wrote in Portuguese, a language outside the mainstream of Western culture, those with access to his writings are relatively few. This book is designed not only to call new attention to this master but also to raise questions about the nature of literature itself and current alternative views on how it can be approached. Four essays address the question of Machado's "realism" in the five masterpiece novels of his maturity, especially Dom Casmurro. The noted contributors include John Gledson (University of Liverpool), João Adolfo Hansen (Universidade de São Paulo), Sidney Chalhoub (Universidade de Campinas), and Daphne Patai (University of Massachusetts at Amherst). Dain Borges of the University of California at San Diego says, "[This is the] only collection explicitly debating the question that polarizes contemporary Brazilian criticism of Machado de Assis: was he a sophisticated late realist, or was he a pioneering anti-realist, even a postmodernist? The [essayists] marshal their evidence and argument with virtuosity andarrive at sharply opposing conclusions."
AUTHOR BIOGRAPHY
Richard Graham is Frances Higginbotham Nalle Centennial Professor of History Emeritus at the University of Texas at Austin.
TABLE OF CONTENTS