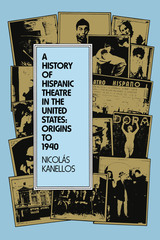 Hispanic theatre flourished in the United States from the mid-nineteenth century until the beginning of the Second World War—a fact that few theatre historians know. A History of Hispanic Theatre in the United States: Origins to 1940 is the very first study of this rich tradition, filled with details about plays, authors, artists, companies, houses, directors, and theatrical circuits. Sixteen years of research in public and private archives in the United States, Mexico, Spain, and Puerto Rico inform this study. In addition, Kanellos located former performers and playwrights, forgotten scripts, and old photographs to bring the life and vitality of live theatre to his text. He organizes the book around the cities where Hispanic theatre was particularly active, including Los Angeles, San Antonio, New York, and Tampa, as well as cities on the touring circuit, such as Laredo, El Paso, Tucson, and San Francisco. Kanellos charts the major achievements of Hispanic theatre in each city—playwriting in Los Angeles, vaudeville and tent theatre in San Antonio, Cuban/Spanish theatre in Tampa, and pan-Hispanism in New York—as well as the individual careers of several actors, writers, and directors. And he uncovers many gaps in the record—reminders that despite its popularity, Hispanic theatre was often undervalued and unrecorded. For all students of American theatre and Hispanic culture, this original study should be required reading.
AUTHOR BIOGRAPHY
Nicolás Kanellos is Director of Arte Público Press and Brown Foundation Professor of Hispanic Studies at the University of Houston. He is the author or editor of more than thirty books, including Hispanic Immigrant Literature.
TABLE OF CONTENTS