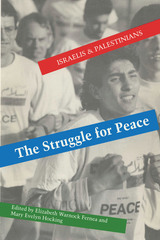 The determination of ordinary people to end regional and global conflicts is powerful despite the forces opposing them. The Struggle for Peace explores how average citizens on both sides of the Israeli-Palestinian conflict worked for peace in the late twentieth century. Essays by noted scholars are juxtaposed with profiles of individual Israelis and Palestinians involved in peace activism. What emerges is a unique perspective on the prospects for peace in this troubled area.

Coordinated with a documentary film of the same name, the book is designed as a tool for the study of conflict resolution generally and the Israeli-Palestinian conflict in particular. The twelve original essays deal with the issues from different disciplinary perspectives: political science (Yehoshafat Harkabi, A. R. Norton, Muhammad Muslih, and Robert Vitalis); history (Avraham Zilkha and Joel Beinin); anthropology (Robert Rubinstein); sociology (Salim Tamari); film (Steven Talley); law (Edward Sherman); and international peacekeeping (Christian Harleman). The human side of the struggle is presented through brief biographies and portraits of twenty-five ordinary Israelis and Palestinians involved in peace activities in Israel and the West Bank.

AUTHOR BIOGRAPHY
Elizabeth Warnock Fernea (1927–2008) was Professor of Comparative Literature and Middle Eastern Studies at the University of Texas at Austin. Mary Evelyn Hocking is a freelance writer.
TABLE OF CONTENTS