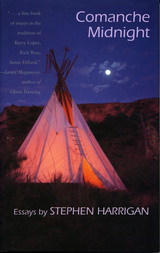 Writing timeless essays that capture vanished worlds and elusive perceptions, Stephen Harrigan is emerging as a national voice with an ever-expanding circle of enthusiastic readers. For those who have already experienced the pleasures of his writing—and especially for those who haven't—Comanche Midnight collects fifteen pieces that originally appeared in the pages of Texas Monthly, Travel Holiday, and Audubon magazines.

The worlds Harrigan describes in these essays may be vanishing, but his writing invests them with an enduring reality. He ranges over topics from the past glories and modern-day travails of America's most legendary Indian tribe to the poisoning of Austin's beloved Treaty Oak, from the return-to-the-past realism of the movie set of Lonesome Dove to the intimate, off-season languor of Monte Carlo.

If the personal essay can be described as journalism about that which is timeless, then Stephen Harrigan is a reporter of people, events, and places that will be as newsworthy years from now as they are today. Read Comanche Midnight and see if you don't agree.

AUTHOR BIOGRAPHY
A former senior editor of Texas Monthly magazine, Stephen Harrigan writes full-time from his home in Austin. His recent books include Big Wonderful Thing: A History of Texas.
REVIEWS
...a fine book of essays in the tradition of Barry Lopez, Rick Bass, Annie Dillard.... This is a book for the general reader, written by a truly literary stylist with remarkable renderings of place and character.
— James Magnuson, author of Ghost Dancing