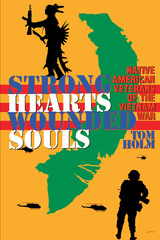 At least 43,000 Native Americans fought in the Vietnam War, yet both the American public and the United States government have been slow to acknowledge their presence and sacrifices in that conflict. In this first-of-its-kind study, Tom Holm draws on extensive interviews with Native American veterans to tell the story of their experiences in Vietnam and their readjustment to civilian life. Holm describes how Native American motives for going to war, experiences of combat, and readjustment to civilian ways differ from those of other ethnic groups. He explores Native American traditions of warfare and the role of the warrior to explain why many young Indian men chose to fight in Vietnam. He shows how Native Americans drew on tribal customs and religion to sustain them during combat. And he describes the rituals and ceremonies practiced by families and tribes to help heal veterans of the trauma of war and return them to the "white path of peace." This information, largely unknown outside the Native American community, adds important new perspectives to our national memory of the Vietnam war and its aftermath.
AUTHOR BIOGRAPHY
Tom Holm served in Vietnam in 1968. Today he is Professor of American Indian Studies at the University of Arizona.
TABLE OF CONTENTS