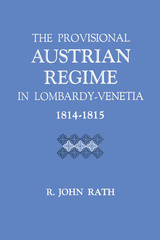 BUY FROM
The Provisional Austrian Regime in Lombardy–Venetia, 1814–1815
by R. John Rath
University of Texas Press, 1969
eISBN: 978-1-4773-0180-7
Paper: 978-0-292-74154-6
When Austrian soldiers first set foot in Lombardy-Venetia in October, 1813, they were greeted everywhere as liberators and friends. In the spring of 1815, when Joachim Murat's efforts to establish a united Italy ended in miserable failure and when the Habsburgs announced the main features of the regime they intended to establish in their Italian provinces, the Venetians were still strongly pro-Austrian, but considerable anti-Habsburg feeling had developed among the Lombards. This carefully documented study of the first two years of Austrian reoccupation of Lombardy-Venetia examines all aspects of the Habsburg provisional regimes and draws some conclusions about the reasons for the different attitudes in the two provinces. In detailed sketches of the provisional governments of Venetia (Chapter I) and Lombardy (Chapter II) and an examination of Austrian economic policies and practices in both provinces (Chapter III), the author shows that although the governments of the two provinces shared many common traits, they differed in a number of significant ways. Actually, Venetia was much less efficiently governed than Lombardy; and the Lombards enjoyed at least a small measure of self-administration that was largely denied the Venetians. The Lombards were much more prosperous than their neighbors, yet they paid much less in taxes and were exempt from most of the burdensome military requisitions that the Austrians inflicted on the Venetians. In spite of these advantages, the relatively small nationalist movement in Austria's Italian provinces was almost entirely confined to Lombardy. The author examines public opinion in Lombardy-Venetia about liberal intrigues (Chapter IV); the relationship of secret societies to liberalism (Chapter V); the Brescian-Milanese conspiracy (Chapter VI) and the Austrian handling of that affair (Chapter VII); and the fiasco of Joachim Murat's "War of Italian Independence" (Chapter VIII).
AUTHOR BIOGRAPHY
R. John Rath (1910–2001) was Professor of History at Rice University and the founder and editor of the Austrian History News Letter and its successor, the Austrian History Yearbook.
TABLE OF CONTENTS