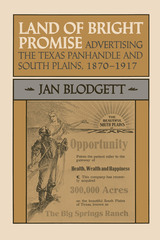 BUY FROM
Land of Bright Promise: Advertising the Texas Panhandle and South Plains, 1870-1917
by Jan Blodgett
University of Texas Press, 1988
eISBN: 978-0-292-76230-5
Paper: 978-0-292-74223-9
“It shall be the chosen land, perpetual sunshine shall kiss its trees and vines, and, being storied in luscious fruits and compressed into ruddy wine, will be sent to the four points of the compass to gladden the hearts of all mankind . . . They will breathe the pure and bracing air, bask in the healing sunshine, drink the invigorating wine, and eat the lifeprolonging fruit.”—from a brochure advertising the Staked Plains fromthe Missouri Pacific Railway Company, 1889Land of Bright Promise is a fascinating exploration of the multitude of land promotions and types of advertising that attracted more than 175,000 settlers to the Panhandle–South Plains area of Texas from the late years of the nineteenth century to the early years of the twentieth. Shunned by settlers for decades because of its popular but forbidding image as a desert filled with desperados, savage Indians, and solitary ranchers, the region was seen as an agricultural and cultural wasteland. The territ0ry, consequently, was among the last to be settled in the United States. But from 1890 to 1917, land companies and agents competed to attract new settlers to the plains. To this end, the combined efforts of local residents, ranchers and landowners, railroads, and professional real estate agents were utilized. Through brochures, lectures, articles, letters, fairs, and excursion trips, midwestern farmers were encouraged to find new homes on what was once feared as the “Great American Desert.” And successful indeed were these efforts: from 13,787 in 1890, the population grew to 193,371 in 1920, with a corresponding increase in the amount of farms and farm acreage. The book looks at the imagination, enthusiasm, and determination of land promoters as they approached their task, including their special advertisements and displays to show the potential of the area. Treating the important roles of the cattlemen, the railroads, the professional land companies, and local boosters, Land of Bright Promise also focuses on the intentions and expectations of the settlers themselves. Of special interest are the fifteen historical photographs and reproductions of promotional pieces from the era used to spur the land boom. What emerges is an engaging look at a critical period in the development of the Texas Panhandle and an overview of the shift from cattle to agriculture as the primary industry in the area.
AUTHOR BIOGRAPHY
Jan Blodgett is College Archivist and Records Management Coordinator atDavidson College in North Carolina.
TABLE OF CONTENTS


Acknowledgments1. Introduction2. The Boosters3. The Railroads4. The Ranchers5. Land Agents and Colonizers6. The Settlers7. ConclusionAppendix A. Population StatisticsAppendix B. Acreage StatisticsAppendix C. Booster Songs and PoetryNotesBibliographyIndex