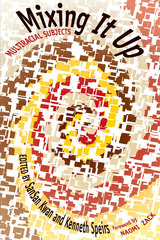 The United States Census 2000 presents a twenty-first century America in which mixed-race marriages, cross-race adoption, and multiracial families in general are challenging the ethnic definitions by which the nation has historically categorized its population. Addressing a wide spectrum of questions raised by this rich new cultural landscape, Mixing It Up brings together the observations of ten noted voices who have experienced multiracialism first-hand. From Naomi Zack’s “American Mixed Race: The United States 2000 Census and Related Issues” to Cathy Irwin and Sean Metzger’s “Keeping Up Appearances: Ethnic Alien-Nation in Female Solo Performance,” this diverse collection spans the realities of multiculturalism in compelling new analysis. Arguing that society’s discomfort with multiracialism has been institutionalized throughout history, whether through the “one drop” rule or media depictions, SanSan Kwan and Kenneth Speirs reflect on the means by which the monoracial lens is slowly being replaced. Itself a hybrid of memoir, history, and sociological theory, Mixing It Up makes it clear why the identity politics of previous decades have little relevance to the fluid new face of contemporary humanity.
AUTHOR BIOGRAPHY
Sansan Kwan is Assistant Professor of Performance Studies at California State University, Los Angeles. Kenneth Speirs is Assistant Professor of English at Kingsborough Community College in Brooklyn, New York.
TABLE OF CONTENTS